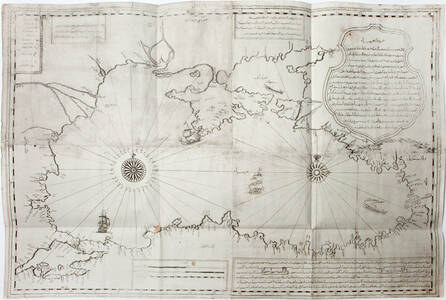 This map, unlike his books, is apparently not mentioned in the probate inventory of Müteferrika’s possessions at his death in 1747 (Sabev 2007).
According to Toderini (1787), who acquired a copy, probably in the 1770s, the engravers were Ahmed of Crimea and Migridiz of Galata (an Armenian, according to Babinger 1919), and the plate was prepared, scrutinised and improved by the ablest geographers, before being printed by Müteferrika.
According to Lüdeke (1789), it was priced originally (together with two other maps) at around 130 piastres, but by his time the price had doubled. According to Ehrensvärd (1979), a copy was sent by Müteferrika to the Swedish government in Stockholm in 1735, together with a complete set of the Müteferrika books; this was because of the interest shown by the Swedish envoy Edvard Carlson during his residence in Istanbul. The map was subsequently deposited in Lund University Library.
According to Sabev (2007), a copy was also presented to the Habsburg government in Vienna, together with a complete set of the Müteferrika books. The map was subsequently deposited in the Hofbibliothek, now the Österreichische Nationalbibliothek.

Five other copies of the map exist at Topkapı Sarayı Kütüphanesi in Istanbul, at Universitets-biblioteket Lund, at Yale University Library, and Österreichische Nationalbibliothek Vienna (2 copies).

From the same author 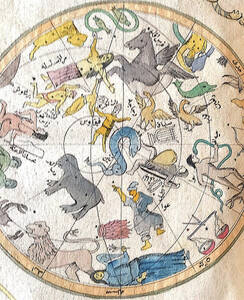